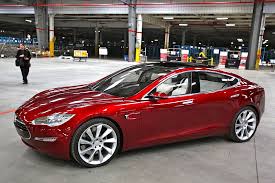 So Tesla CEO Elon Musk has thrown the cat among the pigeons and declared that Tesla will open up their patents on their inventions. His collective call to industry is to take action to ‘build it, and they will come.’ The industry being those making electric cars and the chargers, the ‘they’ being the purchasers of these cars. Musk’s press release from mid June is here: All Our Patent Are Belong To You

Why is Musk doing this?

Let’s be blunt. Tesla are forerunners in the electric car market but there can be no market (of any scale) unless they build a huge charging network. So if that doesn’t happen then Tesla can’t sell cars. No supply means no real market. But on a larger scale is he being philanthropic with their hard-earned patents? Or is it just great marketing? Personally, I see patents are being barriers, not enablers, of new products.

Why are patents stifling competition?

Patents were designed to give protection, for a defined period of time, to offset the huge amount of R&D that some products need like drugs for example. Bring new drugs to market can take years and huge amounts of money and in the absence of patents companies simply won’t invest, as competitors can enter at any stage,  so we can’t avail of these new drugs.

But…the downside is that patents are used to block technology more than enable it. Consider IBM who were awarded 6809 patents in 2013. They have been the highest patentee for over 20 years. Many of these are created to simply block other players from getting a foothold. Then you get to patent stalemate and have companies registering patents as blockers, not enablers.

Can’t we bypass patents to allow invention and innovation?

There is a way around this, without infringing on patents and ending up fighting legal cases. Elon Musk, and others, are opening up patents once they are used within ‘good faith’. Twitter, in 2012, announced that they would allow others to access their patents and would only invoke them ‘in defence’ which is great. As far as I know, but could be wrong, Twitter let their staff register the patent instead of themselves. It means they manage to retain great inventors in the organisation as the creator still gets the IP on the patent. Please add a comment if I’m not correct on that.

In the 80s IBM opened their technology with their ‘open architecture’ which created the market for PCs as other companies could then use their blueprints. So it has been proven to allow small markets rapidly scale.

Is Elon Musk a modern-day Bruce Wayne type Batman character who uses his fortune for the good of mankind? I’m not so sure. But would I buy an electric car? You bet I would if I could afford it, and could charge it when I drove.

This Irish Times feature piece is a very touching story that puts a lot of our day-to-day grumblings into perspective. Rebecca, the 18-year-old sister and writer, is very eloquent in describing her sister’s spirit. It’s Makayla ‘get back up again’ spirit, while having Down syndrome, that moves me the most. She knows she is a little different (and what of it) but believes why should that stop her. Thanks to the Bradley family for letting us into their world with great honesty.

For most people hearing that the TrueCrypt encryption software has potentially gone end-of-life in a hurry will be a non-event. For those who are concerned with IT security it’s a whole other issue and is a big worry. It’s still very unclear whether this is some form of hoax.

I’d agree with other commentators and not panic. We’ll get more information shortly and if it’s true then it’s time to look at the many migration options. My instinct is that it’s a hoax, but other signs suggest it’s not.

There’s more information here if you want to dig deeper:

Great news that AirSpeed Telecom’s CEO (@AirSpeedTelco) won the award for Entrepreneur of the Year at the European Business Awards. I’ve used their services in the past and their level of service and dedication was unmatched. This award is no surprise to me. Well done to Liam O’Kelly and AirSpeed Telecom. 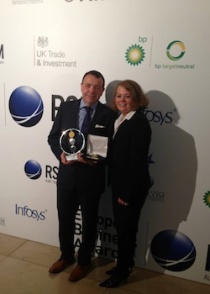 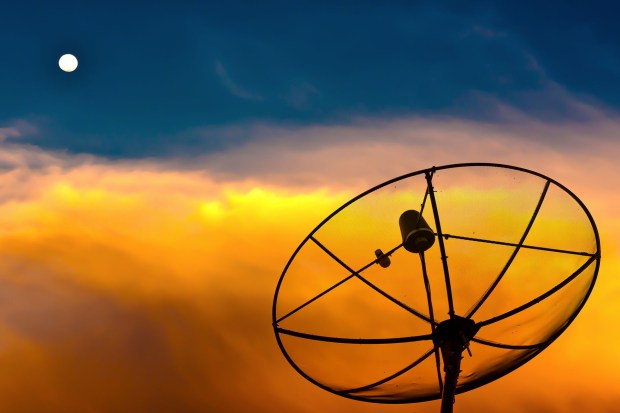 Or check in on Foursquare while on the dark side of the moon? You have to part-laugh at the (factual) headline that ‘the moon officially has faster broadband speed than rural Ireland’. It’s unreal to think that internet can travel 400,000kms, and be faster than we can get in parts of Ireland. If you want more info on the article you can read the Wired article and the deep-dive details from the Optical Society’s piece on it

Personally, I don’t subscribe to the belief that faster internet alone would lead to greater economic prospects for Ireland. My belief assumes the internet runs at a satisfactory speed which in Dublin it does for the most part. But, I digress now…..
So shall we see space tourists Tweeting in realtime?

This is one that has me torn. I truly believe we, Irish folks, should pay for water. Other utilities need to be paid for and no one is saying ‘why are we paying for electricity and gas?’ But in life it’s what people are used to and people, including me, don’t like change. So it’s hard to tell people to pay for something new.

My personal difficulty is with how long it’s taken to find out the costs. And then the real costs are going to be higher than we recently were told they would be. Don’t soften us up with a mistruth – just be honest. This site shows what will be the more realistic costs.

Others, like the Impact Trade Union, challenge the figures that we’ve been given to justify the cost of the roll-out.

But, there is some black humour in paying for water in Ireland. We do get rather a lot of rain. Time to go for some lunch now, get the umbrella out again and maybe shed some tears in the rain. 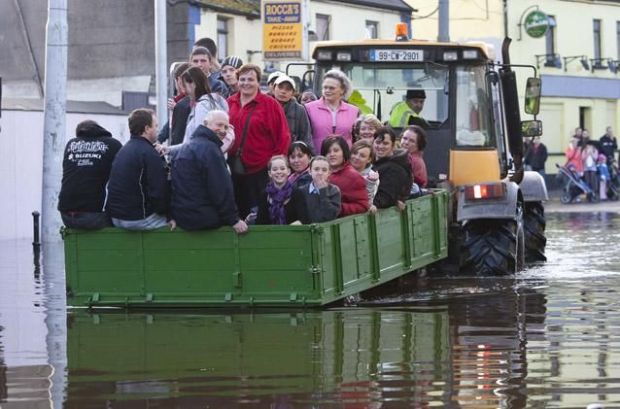 Some good comments, towards the end of this piece, on how top IT leaders need to learn the client acquisition side of the business in order to stay relevant. The short interview is with Niall Kelly, CIO of the Irish security company Netwatch.

You just got to love the simplicity of this one, which has been doing the rounds in 2014. The ‘doer’ just ‘does’ while others stand and discuss. 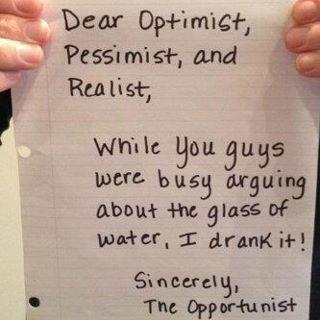 I’m most interested in New Year’s resolutions that allow me grow in more than just a business or work sense. I think if we solely concentrate on the work goals, which we are inundated with in January, we unbalance ourselves. Surely it’s better to work to a high level across all compartments of your life – home, social and work – instead of having a ‘super GPA’ simply in one compartment to the detriment of others. A rising ‘personal tide’ should life all your life’s boats if you will.

Ted Talks are the antidote to these boring New Year’s resolutions. I watched one from Neil Pasricha recently and it’s so touching and inspirational. His ‘American Dream’ fell apart suddenly and he struggled in life and decided to dig deep to find a way out. I won’t spoil it, you can see his Ted Talk here.

Neil created a blog of ‘1000 Awesome Things’  which are so trivial they are ‘awesome’ and has 50+ million blog hits. They are as simple as ‘#589 Making the first footprint in fresh snow’. He is basically challenging us to embrace the world like a 3 year, seeing it all for the first time all over again. There is magic in simplicity.

I’m struck, as is Neil, by how as adults we are supposed to be mature. Are we putting that pressure on ourselves, or society, or the workplace? He’s suggesting we treat one thing a day like you were a kid and be in awe of something / anything in order to regain some of the magic of wonderment.

What’s your 1 awesome thing today? Share your comments. Mine is posting this article instead of just considering writing it. If you have 17mins to spare you’ll smile at least once, I know it – http://on.ted.com/fzpQ. Or go to his blog here: http://1000awesomethings.com/

My Tweets
World Of Innovations

What is innovation in the 21st century?

because anything is possible with Charisma

A time-ticking countdown of 1000 awesome things by Neil Pasricha

The latest news on WordPress.com and the WordPress community.